Send Us a Message

How You Can Help

A Mitzvah for the Dead

Home > HFBA  > A Mitzvah for the Dead 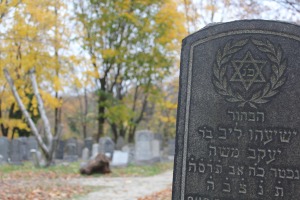 23 Dec A Mitzvah for the Dead

Last December, I was profiled by a Zoë Kirsch student from Columbia Journalism School.  The article just popped up on my social media pages under last year’s memories.  I thought I would share the article here with you.

The sight is a curious one: six strangers waiting in front of padlocked cemetery gates, on an otherwise deserted road in Staten Island. It’s freezing because it’s November, and because it’s a Sunday, everyone’s a little sleepy.

As they wait, they blow on their hands and stomp their feet and yank their hats more snugly over their frostbitten ears. And, becoming less strange to one another by the minute, they speak to one another – about the usual things, like who they are and where they come from
but also about the unusual things, like where their bodies will go once they die.

At 10 o’clock on the dot, the man they’ve been waiting for arrives in a swirl of color and confidence, all sincerity and rimless glasses. It’s Andrew Parver, 31, the director of operations at The Hebrew Free Burial Association, and he’s here to unlock the gates to Silver Lake
Cemetery so that the group can begin today’s community cleanup event.

Parver and the others at the burial association host meet-ups like this twice a year, both here at Silver Lake and at Mount Richmond Cemetery, which is also in Staten Island. (Together, the two cemeteries comprise half the Jewish burial ground in that borough). But Parver is kept busy year-round, what with facilitating cemetery cleanup visits from school children and other volunteer groups — November is peak season, he says, with three to four groups a week — and participating in the burial group’s hugely ambitious mission: “HFBA, through its contacts with city and social service agencies, is notified about Jewish decedents and makes arrangements so that every Jew receives a prompt, dignified Jewish funeral and burial,” their website reads.

Put simply, in Parver’s words: “People die, and they either have no one to care for them, or no money, or both. We take care of them.”

“Them” includes the long-gone. Although bodies are no longer buried at Silver Lake, Parver and his associates work hard to ensure that the people who were put to rest here long ago – many of them indigent, including infants and children – get attention. That means encouraging donors to contribute memorials, which can be wedged into the large swaths of frozen ground that remain unmarked because those buried underneath couldn’t afford headstones when they passed away. It also means replacing old headstones when they’ve become so worn that they’re unreadable.

It’s about five past 10. Parver removes his neon orange Mets cap, revealing an understated kippa, which is fastened to his tawny hair with bobby pins. It’s time to deliver the pep talk.

“We do this because it’s the right thing to do,” he says, gesticulating grandly with his bare hand, which must be freezing. “So every
Jewish person will receive a proper and dignified burial.” It’s a special mitzvah, he adds. An act done without reward.

The crew, which now totals about 20, is invigorated and ready to go. They select rakes, unfurl trash bags, and set off, dispersing like worker ants over the hilly earth.

Parver deflects questions about himself, for two reasons. The first is that he seems to vastly prefer speechmaking about the dead to talking about himself. The second reason is that if this is a party, which it is, in a way, then he’s the host. And his guests have a million questions. A couple who have driven from their home in Connecticut, Gabrielle Savage and Steven Jensen, want help in finding the
graves of Gabrielle’s great-great-grandmother and great-greatgrandfather, Hannah and Isidor Ganer.

Parver whips out his Ipad, which, up until this point, has blended neatly into his jacket. “We had a researcher compile records from the cemetery to create a database, which we’ve exported to Excel,” he says as an aside. “It gives us some idea of what’s going on, and which names are where.”

Savage and Jensen initially discovered their relatives’ burial information on Ancestry.com, which acquired cemetery records from the burial association a few years ago. Now, having located the headstone, the pair studies it carefully, tracing its ridges with their fingers. After a while, Savage, blinking hard, assumes a pose to the right of the monument. Jensen, looking every bit the photographer in steel glasses and a soul patch, snaps pictures twice – first on her iPhone, and then on his Nikon.

At noon, it’s time to clean up the cleanup. Time to turn in the rakes. Time to throw the plastic bags, swollen full of leaves, onto the pile. A few of them burst in the process, sounding like toy guns. Parver is taking in the scene with considerable satisfaction.
“Why’re you smiling?” someone asks him.

“I’m humbled by how many people came out here to help.”